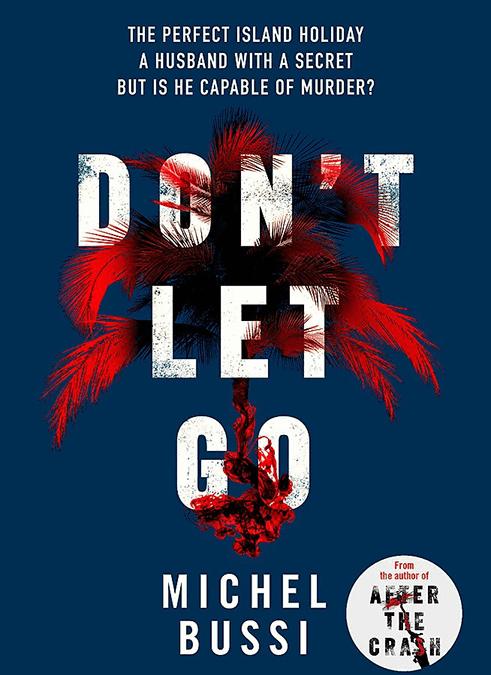 A holiday can be paradise itself, but at other times it can deteriorate into a murderous adventure.

Martial and Liane spend their holidays in an idyllic environment on the island of Réunion. For the couple and their six-year-old daughter, these are the days and minutes of perfect happiness. Crystal-clear, turquoise water, palm trees, warm breezes – then, all of a sudden, Liane Bellion disappears. She goes to their hotel room between three and four in the afternoon and simply does not return. An employee at the hotel claims to have seen Martial in the hotel corridor at that time. Soon Martial disapppears as well, and their little daughter is nowhere to be found, either. They turn over every blade of grass on the whole island to find them. Did Martial kill his wife? If not, what makes him feel guilty?

Let’s start with maybe the biggest drawback, the title.

Because Don’t Let Go basically reminds me of a Danielle Steel book or a ‘90s action movie based on worn templates. On the basis of such an unimaginative title, we might rightly think that the book would not be more exciting than that, but we would be very much mistaken if we did. Bussi’s current thriller takes place on the French island of Réunion, which tourists like, but we should not think it a holiday paradise where you can stumble upon foreigners at every turn. The schifting fate of hotels – one disappears while the other one thrives – well reflects the somewhat resigned life of local residents, which is greatly shaken by the disappearance of a tourist followed by the death of a local resident.

Martial Bellion arrives on the island with his wife Liane and their six-year-old daughter, Sofia, to rest, but the holiday takes an unexpected turn when Liane goes up to her hotel room one afternoon, and she never turns up again. The hotel turns into a mess, but Martial can’t credibly play the role of a broken and worried husband, and soon it is revealed that several people saw him going down to his car with one of the hotel’s linen trollies shortly before he reported his wife missing. The man becomes even more suspicious when he too, together with his daughter, disappears. The island’s police chief, Aja Purvi, and his lazy subordinate, Christosé, undertake the task of solving the mystery, although the latter would rather spend all his time in the bedroom of his mistress, Imelda.

At the beginning, the search for Bellion and his daughter repeatedly falters, especially because it is revealed relatively late that Martial Bellion had had a child whose life had ended in tragic circumstances, but precisely on the island where Liane had disappeared and where the novel takes place. Bussi tries to maintain tension with one of the most traditional writing tools: he constantly changes the perspective of the narrative, we can even get a glimpse from the perspective of the little girl, Sofa, which is a particularly refreshing move by the writer, so that we can gain insight into the thoughts of the meek and naive little girl, who cannot decide whether her father is a victim or a murderer.

“Don’t Let Go!” can in no way be considered a sequel to the author’s book Black Water Lilies; the detectives are different, the location is different, perhaps even the structure of the novel can be considered as different from its predecessor. It is important to point this out because Bussi had to build from scratch when he created this story, the reader has no way of knowing any of the characters from before (as opposed to the traditions of Scandinavian mysteries, for example, where writers mostly use a (pair of) detective(s) till the end of their lives).

Therefore, Bussi had to be very convincing with characterisations in order to encourage his readers to read further.

He did not have to nudge me for long as, although I have thoroughly criticised the title above, apart from this, there are no platitudes with Bussi – not only the action and scene of the thriller, but also its characters are unique, which makes us really excited about what the next chapter will be about because we can only grope for what will happen next and can only guess that, considering it’s a crime story, the murderer will be exposed in the end.