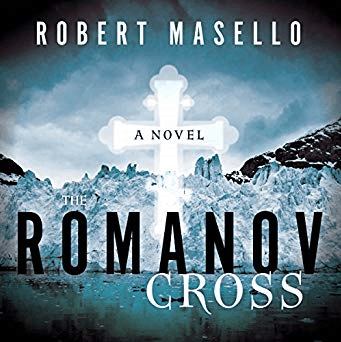 His previous novel, The Einstein Prophecy, was based on an interesting concept, too, but the mystery really ripened here. I was totally preoccupied by the three genres as this novel is a combination of the thriller, historical fiction and supernatural tragedy measured out in a masterly fashion.

The main character in the story is Major Dr Frank Slater, who was sent to Alaska following his forced discharge to perform a very important and dangerous task.  The task of Slater, an epidemiology expert, and his team is to collect samples from the victims of the 1918 Spanish flu and find out whether the virus is still viable.

This was the disease that had finished off the members of the Russian sect that had settled down on the island of St. Peter long before. And, unexpectedly, a coffin pops out of the sea.

By the way, this is a historical thriller of rapid pace.  The second plot running through the novel is that of the ill-fated Romanov family, the last rulers of Russia, who stayed in power for about 300 years. As to the Romanovs, and Russian rulers in general, it should be noted that they amassed unimaginably vast riches.

Nicholas II was one of the richest men in the world in those times. Following the execution of the family, most of their jewellery disappeared. Otherwise, it was only rather late, in the 1990s, that a historian discovered the carefully hidden, buried Romanov corpses. Even he found only nine skeletons, two more were still missing. Those two appeared only later, dispelling any myths. The author paints an accurate picture of this as well.

Rasputin’s character also adds a lot to the reality and the legend, to the story of the novel. It is around the cross that Rasputin gifted away long before that the complications unfold. To whom it was given and why should remain a surprise, just like the question who the “spirit” of the island is and what kind of secrets it is preserving.

The reader is handed a good deal of Russian history as well as a touch of supernatural, mystical thread. Just think about it: Robert Masello meets Indiana Jones. He has woven a perfect fabric of supernatural elements – this is a really exciting thriller. Masello’s characters and the story really come to life on these pages. They describe the inclement climate and features of the Bering Straight and Alaska vividly. The chilly sea and the howling of the wind cut through to the reader’s bones as well.

Adding to Slater’s scientific investigation, we get a little of Alaskan folk traditions and the Spanish influenza epidemic plays an important role as well. Besides, there appear two local bad guys, a couple of brothers, some real twits, wretched fellows, for whom nothing ever really works out. Their treasure hunt, in the hope of getting rich, starts out to the island in secret. Their amusing character fills the story with life. The local mayor is cast in an unusual role. Who live, who lived on the island, what really happened to them? Who’ll survive the search for the deserted colony? So there is ample excitement and mystery while the story also raises various moral issues.

The Russian investigating body closed the investigation into the murder of the Romanovs in 2011 with the conclusion that the skeletons found in Yekaterinburg in July 1991 really are the remains of the czar’s family. Otherwise, it was only rather late, in the 1990s, that a historian discovered the carefully hidden, buried Romanov corpses. Even he found only nine skeletons, thus two more were missing. Those two appeared only later, dismissing any further myths.

Masello uses real facts and builds them into the plot of the novel in excellent ways.

Beside the historical legend, reality is coupled with an unbelievably tense and intriguing frame story. During the final chase and with the solution, my jaw dropped. A snippet of mystery added to the treasures, the deadly virus, love and a historical legend brings even more shivers to the readers of the events. Robert Masello fascinated me. I hope I’ll still have the opportunity to read more by him.

Robert Masello is one of the most successful historical and mystical crime writers of the United States. He’s a prize-winning journalist and screenplay writer. His novels have been translated into 15 languages. He gives college and university lectures. Presently he lives and creates in Santa Monica in California.