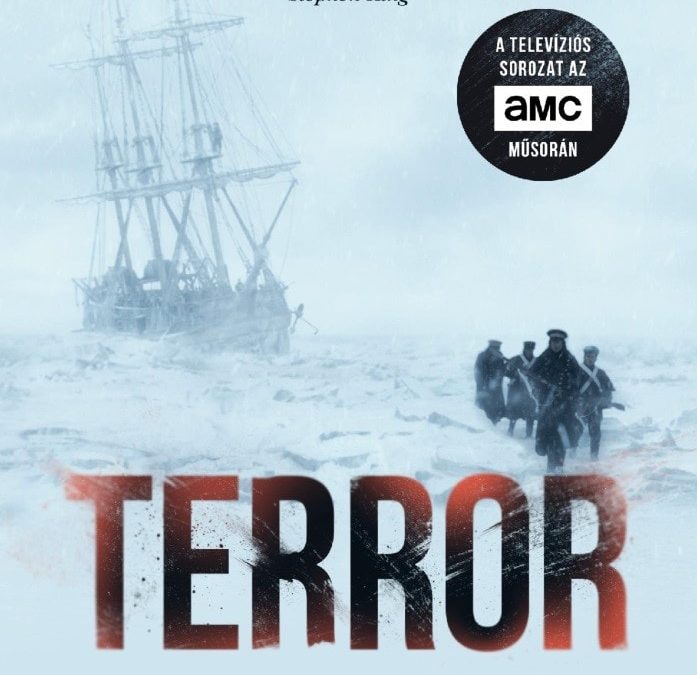 The well-known line out of Mihály Vörösmarty’s famous poem, Prologue, perfectly fits Dan Simmons’ most recent historical thriller volume: “Now is winter and silence and snow and death.” Indeed, in the case of the story, based on real historical events, of the Franklin expedition, which left in 1845 to find the legendary North-West Passage, one (and perhaps the major) deadly danger is the ruthless Arctic cold lurking the explorers…

However, this is not the only danger.

Around the ships called Terror and Erebus, there are the omnipotent, constantly wandering ice floes as well, threats come from the always dwindling and decaying food, scurvy, and the dark side of frail human nature, and, finally, there prowls about the ships the apparently invincible monster, reminiscent of a huge polar bear, methodically seeking the destruction of humans. In real life, no one ever came back alive from the two ships: thus the fate of the one hundred and thirty explorers was death – at least on paper. But of course Simmons was always famous for his surprising ideas…

His novel called Terror shows the struggle between man and nature using the means of historical adventure stories and Gothic horror. We are presented with faithful and authentic descriptions. The author uses a lot of sources to build the story of the expedition in minute detail, manoeuvring a large number of participants, but always bearing in mind the focal points, thus preventing his novel from splintering.

The cold penetrating to the bone, the dozen types of ice, maritime terminology are all vivid and in place, the reader lives through the sea adventure as an authentic experience. The horror begins with the naturalistic description of various injuries, illnesses and deaths, and with the acts of the monster, then reaches its potential with the manifestations of human viciousness and the spreading of cannibalism. As The Guardian points out about the volume, the horrific events are provided a special weight by the fact that “the abominations described by Simmons are largely based on reality”. After reading the novel, it is enough for us to glance at the Wikipedia article about the Franklin expedition to shudder at the realistic bases of the events.

Despite the fact that Terror is a work of more than 700 pages of Leviathan proportions, it reads very easily. It is to the credit of Simmons’ genius that, while skipping among the points of view of the various characters, he has succeeded in presenting the events amazingly well. The excitements are varied, they never wilt, not for a moment does the story become as bleak as the chilly landscape where it takes place. The narrative communicates events primarily from the perspective of Captain Sir John Franklin, Captain Crozier and the surgeon Dr. Goodsir, but from time to time some lesser or more substantial minor characters get into the narrator’s role (e.g. the malicious, sodomite assistant, Cornelius Hickey) as well.

The characters are otherwise splendidly composed, interesting and lifelike figures, not by any chance are they the immaculate, idealized English gentlemen the reader would anticipate. Franklin, for example is somebody “everybody loves, but nobody respects”, Crozier is a real drunk, and Dr. Goodsir is among the physically weakest members of the expedition, and is not even a real doctor, only an anatomist. As the story moves forward, so keep the members of the crew falling. Characters with the ability to change can remain alive a little longer than those who insist on their wrong decisions and points of view contradicting the harsh reality. Nor can the main characters stay safe in the novel, of course, and this makes the whole work particularly exciting.

A single female is to counteract the masculine strength of the exclusively male crew: Miss Silence, a speech impaired Eskimo woman, who gets in contact with the explorers as a result of a shooting spree gone wrong. The mysterious lady fulfils her role splendidly and, with her mysteriousness and attachment to the freezing wild, is an excellent counterpoint to the characters of the “civilised” British men. And before we supposed that Silence made it into the story because of a forced love affair of sorts, I have to premise that the Eskimo girl really has a serious role and importance in the progression of the plot.

Simmons is no stranger to the humour, and it flashes up even in this absolutely sombre and dark-looking, hopeless novel, even if in a wry and evil form. Naturally, I am definitely not thinking of jokes exciting roars of laughter, only gallows humour which in some cases helps mitigate the brutality of the vision of the inevitable end. I suspect that in anyone else’s case this would be a stylistically foreign component but this author can apply it amazingly, without spoiling the atmosphere of the novel. Excellent examples of this are a few dry remarks by Crozier or that he recites ideas from Hobbes’ Leviathan as biblical quotes at the obligatory marine religious services and the funerals of his deceased companions.

At this point we have arrived at the returning element of Simmons’ writing, his literary references and his intertextuality. As previously his Hyperion reflected on Keats’ works and The Canterbury Tales, and Ílion evoked the Iliad and Shakespeare’s works, in the case of Terror, he conjures up Hobbes’ Leviathan and The Masque of the Red Death by Poe.

In his case, these winks always have serious significance: instead of simple gimmicks, these motives provide the keys to the interpretation of the work as well as enrich it. In the present case, the heaviest thoughts of Hobbes’ classic political scientific work (such as that, in its natural state, “human life is lonely, poor, nasty, brutish and short”) are examined in extreme circumstances where the social contract with the state effectively breaks up.

Finally a few words about the end of the volume, without a spoiler, of course.

Since this is a “true story” as it were, Simmons had quite little freedom of movement. He could have dashed off an ending where everyone dies but at least they have found the North-West Passage and taken the monster with them into death, therefore the moral victory would belong to the explorers. At the other extreme, some could have escaped, but for some reason they would not have made it into the history books…

However, strangely, at the end of the novel, it is not survival itself which is of the essence. Instead, the key is adaptation: is there an officer or sailor on board the ships who could suitably transform his way of thinking, behaviour, his everything so that, separated physically and morally from the state, he could adapt, that is, re-adapt himself to the inclement natural conditions? The author provides an impressive answer to this question, and solves the mystery of the monster admirably as well.

As it is obvious from the foregoing, Simmons put down another great novel on the table this time, too, even if he did not create it in his usual genre of the sci-fi or space opera. What represents a flaw in his work is an exclusive flaw in the Hungarian edition. Although the cover itself has come out faultless and the translation by Veronika Farkas is also of high quality, unfortunately, probably due to be high volume of the novel, some mistakes have escaped the reviewer’s attention.

Generally, some smaller typos are detectable with numbers: the temperature below freezing point undergo disturbing changes at places (it rises a few degrees, yet it becomes colder) and the number of polar bears killed by the sailors is confusing as well. This is, however, not a serious problem meriting a downgrade. This work is still compulsory reading for Simmons fans, horror maniacs and fans of historical novels.